On Sunday I set out to walk Port of Auckland’s Red Fence Heritage Walk. Click here to download a map of the walk.

The walk starts outside the Voyager New Zealand Maritime Museum. Note the signpost is on the gate of the old entrance to the Museum. There are 15 stops along the 2.4 km walk and each stop is marked with a numbered information board with a historic photograph and text relating to that point.

The walk is signposted with information boards

The second stop outside the Maritime Museum is the War Memorial Beacon. This monument was originally erected in 1915 by the Auckland Harbour Board and listed the names of staff that served during the First World War.  Sometime during the late 1960s – early 70s the memorial was taken down. In 1999 parts of the memorial were found in Shed 51 on Bledisloe Wharf. An anonymous benefactor, ‘a grateful refugee from Nazi Germany’, offered to fund the restoration and the War Memorial Beacon was re-erected on its current site in 2000.

The third stop is Princes Wharf, which was built between 1921 and 1924. The wharf is named after Edward, Prince of Wales who visited Auckland in 1920. Princes Wharf was originally a commercial wharf but now is the site of a cruise ship terminal, restaurants, apartments and office space, a car park building and the Hilton hotel. It is also the site of the Auckland Princes Wharf i-SITE Visitor Information Centre.

The cast iron lamp stands were erected in 1923, Princes Wharf.

The Ferry Building is the fourth stop. It was built in Edwardian Baroque style between 1909 and 1912 and resorted in 1988.

Shed 10 (stop 7) is the only remaining shed of the Queens Wharf Sheds. The two-storied cargo shed is 94.5 metres in length. During the Second World War it was used as a facility to process departing soldiers. Between 2012 and 2013 Shed 10 was refurbished and is now used as a cruise ship terminal and events centre.

Next to Shed 10 on the western edge of Queens Wharf is The Cloud. This 178.5 metre long structure was built as a fanzone site for the 2011 Rugby World Cup and has been used for various events since then. 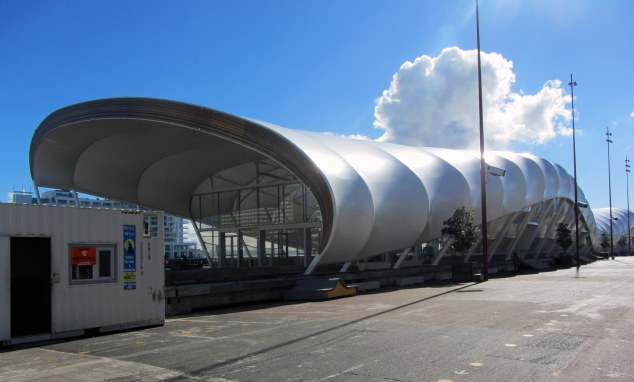 Between Queens Wharf and Captain Cook Wharf is the Admiralty Steps (stop 8). This is where the tug boats now berth but the admiralty steps were used by royal visitors arriving on British naval ships.

Stop 10 is Britomart Point Rock or Te Kawau’s Rock. This marks the point where the British flag was raised in Auckland’s founding ceremony on September 18, 1840.

The Rainbow Warrior Memorial is stop 11. This mosaic memorial commemorates the bombing and sinking of Greenpeace’s anti-nuclear protest vessel the Rainbow Warrior by agents of the French Government at Marsden Wharf on July 10, 1985.

Stop 12 is Bledisloe Wharf. The original wharf that was built between 1937 and 1948 was named after Charles Bathurst, 1st Viscount Bledisloe who was the fourth Governor-General of New Zealand. The wharf was upgraded in 1985 and is now a container terminal.

Stop 14 is Fergusson Container Terminal. This container cargo terminal opened in 1971 and is named after the Fergusson family, who served as Governors of New Zealand from 1873 to 1967.

The final stop is the Ports of Auckland Building. This building was previously the engineering building for Tasman Empire Airways Limited’s (TEAL) flying boats.

You can finish the walk by checking out the 400-metre-long public walkway, which runs along the eastern edge of Fergusson container terminal. Access to walkway is from Solent Street next to the Heliport. This walkway provides amazing views of the harbour and container terminal operations.  Take time to watch the cranes wizz around and load containers onto trucks. 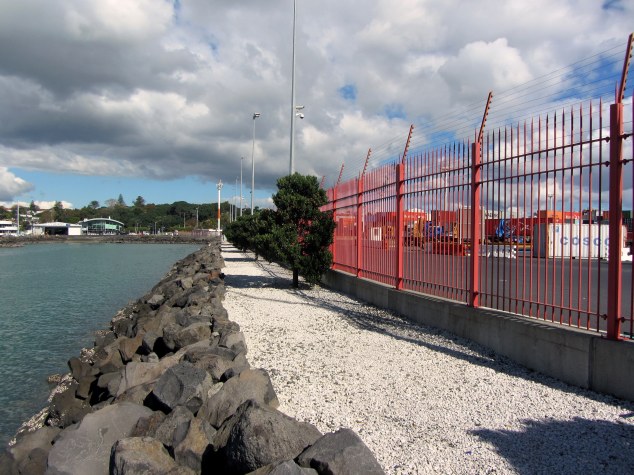 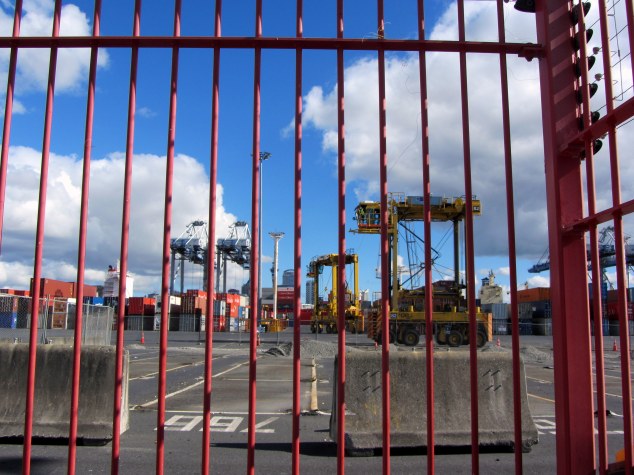