Welcome to the last blog post from my 3-day weekend to Waitomo.

Monday morning I awoke to the sound of rain on the corrugated iron roof of my chalet. I had planned that morning to walk the Waitomo Walkway to Ruakuri Scenic Reserve. After two days of beautiful blue skies and sun I had not planned on the rain.

After waiting for the rain to clear I headed to the entrance for the Waitomo Walkway, which starts in the Waitomo Domain, opposite the Waitomo Discovery Centre (i-Site). The walk takes approximately 1 hr 15 min one way, or 2 hr 30 min return.

From Waitomo Village to the Waitomo Caves carpark it is a 15 minute walk through native bush. There is a 25 minute detour to a lookout point, which gives views of the rolling hills and the Waitomo Caves Hotel on the hill above the township. I had walked up to the lookout on Saturday so I continued on.

Next to the Waitomo Caves Visitor Centre the path picks up and it is a 5 minute bush walk to a clearing by the main road. An entrance to the path is framed by a sign for The Johnson Memorial Grove. This memorial honours the Johnson’s, a pioneer family who arrived in Waitomo in 1907.

A large part of the Waitomo Walkway crosses private farmland. Just follow the orange triangle markers as you make you away across the farmland. There are several stiles to cross and there are some electric fences to be aware of. 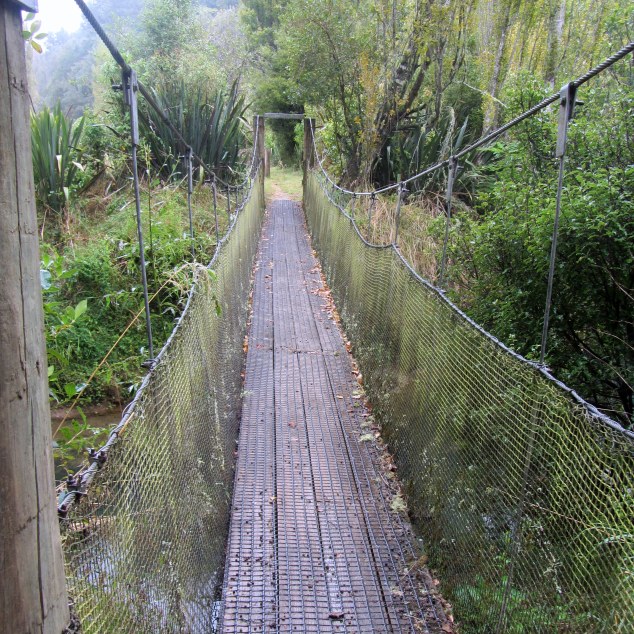 The track follows the Waitomo Stream and one point there is a suspension bridge to cross the stream.

The rain was not the only obstacle, as I approached a sign warning of wasp nests and advising to ‘proceed promptly and quietly’. I was wearing a rain jacket so I put up the hood and high tailed it – almost running when I sensed something fly past me – probably a harmless fly.

The Waitomo Walkway comes out at the Ruakuri Scenic Reserve carpark. There are toilet and picnic facilities at Ruakuri Scenic Reserve. From here I walked The Ruakuri Bushwalk, which is a 30 minute loop track. Every local I meet in Waitomo recommended doing this walk. This walk takes you inside the Ruakuri natural tunnel. Although I walked this during the day this is also a popular walk at night as you can see the glowworms.

After completing the Ruakuri Bushwalk I returned to Waitomo Village back via the way I came. After lunch I took the path from village up to Waitomo Caves Hotel, a historic hotel built in Victorian style in 1908, which had an Art deco style wing added in 1928. From here I had views over the township.

In the afternoon I took the one hour Footwhistle Glowworm Cave Tour offered by Cave World. The tour cost $49 for adults and $24 for children.

The cave is known to Māori as Te Anaroa Cave but the name footwhistle comes from a formation in the cave that looks like a foot with a whistle at the bottom. The cave has a glowworms and all formations that you would expect to find. One opportunity Caveworld offers that other companies don’t is to see the Te Anaroa cathedral (highest point in a cave) lit up by a magnesium torch, a traditional lighting method.

I caught the 5:30pm service to Hamilton provided by Naked Bus and then switched to the Auckland bus at Hamilton.

I had three fantastic days in Waitomo exploring six caves in the area and completing the Waitomo Walkway and Ruakuri bushwalk. If you are more adventurous than me and don’t mind getting wet there are black water rafting cave tours and adventure tours that involve abseiling into caves.